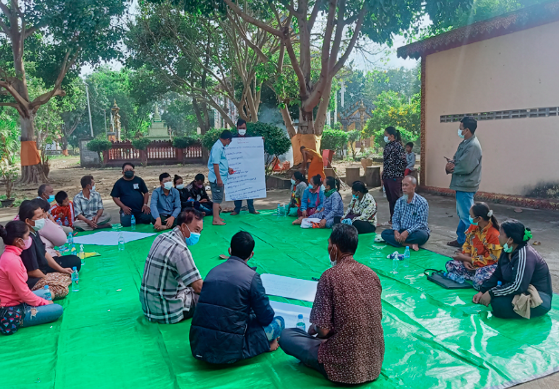 The Hagar Cambodia team continue to be encouraged by the stories that they are receiving from members of their good husbands and good wives groups. Hagar helps run these groups in vulnerable communities to raise awareness about domestic violence and child protection.

The testimony of Chhom* is one that highlights just how powerful these groups are. Chhom was arrested and spent 6 years in jail over land issues. When he was freed, Chhom became blind and was also continuing to live with the trauma and pressure from the land issues and jail time. As a result, he became an angry man and used domestic violence against his wife and children.

Before attending the good husband’s group, Chhom was very violent towards his wife and son. Chhom would drink most days and his drinking would often result in him destroying property, insulting his wife and son and sometimes kicking and punching them. He didn’t see children as having any value, believing that scaring them was the way to get them to listen to him. His world was dark and he had lost all hope.

When Chhom’s wife started attending a good wives group in their community, she encouraged him to go to the husbands group. Initially Chhom thought it would be a waste of time but his wife kept asking him and he eventually agreed to give it a try.

This group has changed Chhom’s life. He arrived and didn’t feel any discrimination or judgement for his blindness. He learnt that he could share with his group about how he was feeling and this opportunity to talk meant he was able to release a lot of his feelings in a healthy way. He has also learnt a lot more about the importance of child protection, community development and prevention activities.

Chhom is now a completely different man as a result of participating in this group. He declares that he now feels like he has value, is motivated and that he will do what he can to be part of strong community development.

Chhom’s wife has also noticed an incredible change in her husband. She shared:

“I feel like he is a new person. He was very different because he did not commit domestic violence and was humble in my family. I was surprised when he encouraged me to teach the children in my community when he never cared before.”