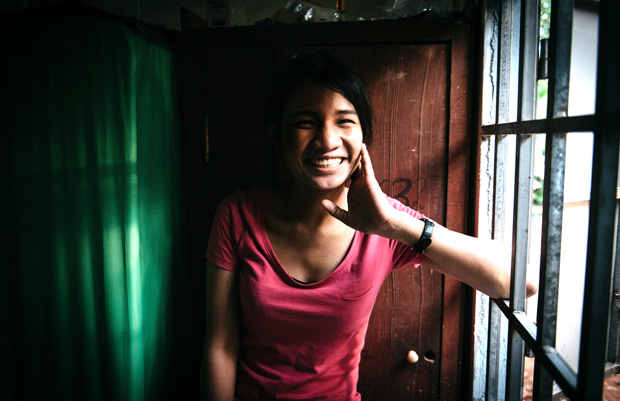 Having lived in central Vietnam in a small ethnic group her entire life, Hoang had no knowledge of human trafficking. So when a woman from a nearby village promised her work in China, Hoang willingly went with her across the border. Only when it was too late did Hoang realise that she had been sold as a bride to a Chinese man. She was only 18.

Hoang managed to contact her parents and while they were upset, they told her that she had no choice but to stay and accept the situation.  Divorce would simply bring too much shame on their family. With no way of getting home, all Hoang could do was hope that her husband would be nice and kind.

He wasn’t. His response to Hoang’s homesickness was to try and beat it out of her.

Hoang went on to have a son and when he was two, her husband finally agreed to take her home to see her family. However, the joy of seeing her family again made Hoang even more homesick and unhappy. This infuriated her husband and he became even more angry and violent than before.

By the time Hoang had a second child, the need to get out of the marriage and escape was almost overwhelming. But she knew she couldn’t leave without her children. She told herself that all she had to do was survive the violence and sadness until her youngest was four years old and able to manage the journey home. And that’s what she did.

When her youngest was old enough, Hoang seized the opportunity to escape one time when her husband was away. Having memorised the way back to Vietnam from her previous journey years earlier, Hoang made her way back across the border with two young children. Having survived nine years of abuse and violence, Hoang finally made it home.

Local police contacted Hagar Vietnam and we journeyed with Hoang to help her recover and heal. Hagar’s staff have helped Hoang with the following:

Hagar has loved and cared for Hoang and her family. After 9 years of deep unhappiness, Hoang simply told Hagar staff:

Hoang is truly an example of what the long-term love and support of Hagar donors and staff can achieve in a person’s life. Together, we have seen transformation!